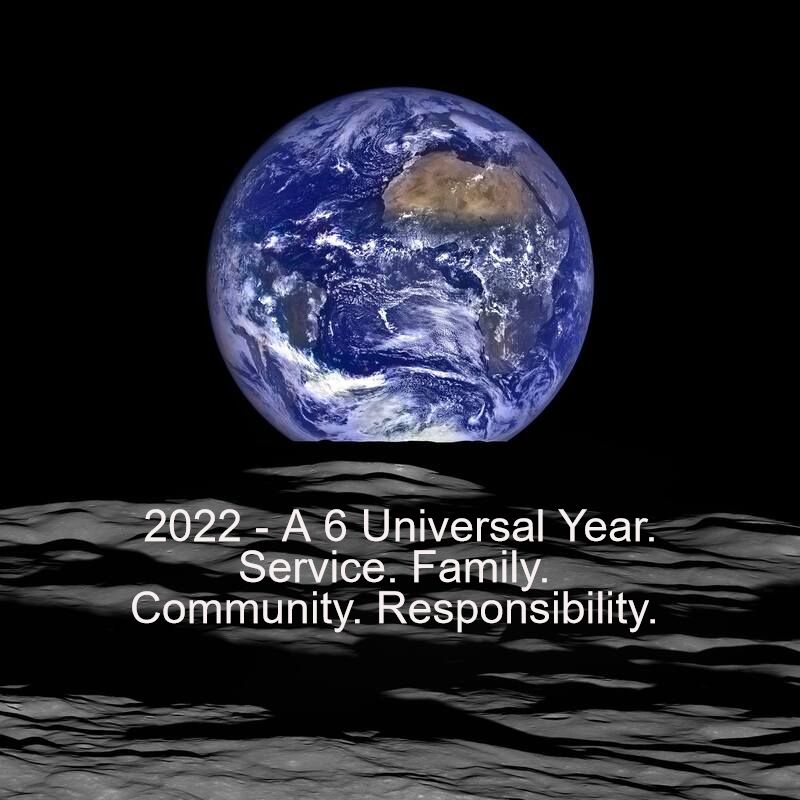 Numerology is an ancient esoteric science that dates back to the time of Pythagoras in ancient Greece, more than 2500 years ago, and in all probability, much further back in time than that. It is a divination and guidance tool that uses the numbers 1-9 and the alphabet to determine things. Universal Years represent the calendar year and are determined by adding the 4 digits of the year (2+0+2+2=6).

2022, a Universal 6 Year should be a year that includes an improvement of conditions in the economy, healthcare and medicine, and in relationships between countries and their citizens. The SIX influence should create an increased harmony in opposing points of view and if the awareness on the part of the powers that be is in tune, there should be a lessening of the extreme divisions and partisan attitudes that infect governments and nations. This is definitely a year for adjustments, re-assessments and working together in a responsible fashion. Responsibilities must be met and we must find a way to return to being a country and a world in which the welfare and well-being of each and every citizen is respected and honored. This would go a long way towards correcting our failure to create balance during 2021 (a 5 Universal Year). Other elements that are particular to the SIX energy and, paramount to possible improvements are in the realm of education, communities, organizations, and responsibilities and service to others. The indications also lean towards the possibility of more co-operation in governments and legislatures. On the world stage, more effort will be directed towards solving problems internationally. Worldwide this will be a year of increasing social movements coupled with a rise in social conscience. If conditions do not improve in a fair and equitable fashion, we may see the rise of radicalism in the public discourse. (It may be prudent to keep an eye on many countries throughout the world as continuing shifts in their societies may result in a greater demand for the people to have a greater voice in matters that directly affect them and, as a result, more conflict with their governments. The United States is not immune from this. In fact, in this author's opinion, we may very well be one of the first countries to have massive internal conflicts.)

The SIX year also indicates a stronger emphasis and focus on marriage, home, family and community and this may well be the year when the issue of true equality for women and minorities is once and for all settled (if not settled, as least set on a positive and forward-looking track), as society becomes more aware that equal rights for all means just that...equal rights! The longer these battles continue, the more fractured we will become and the more disenfranchised people will become. We, the people should also be pushing for movement towards correcting many of the existing injustices judicially and through the law, with the intent of improving conditions on all levels of society. Another area worthy of inspection and progress would be a greater focus on the elderly. Could this be the year that an improved Medicare is approved? Recognizing and honoring the importance of family in all our lives must also be given great consideration. This applies to not only your family of origin and immediate family but also to the “families” that consist of neighborhoods, communities, states, and nations and perhaps, most importantly, the “family of man” of which we are all members.

As consciousness rises, the energies will be more directed to the elements of love, understanding, the consideration of others, and the realization that we all hold responsibilities for everyone. 2022 has great potential for people to step up and take responsibility for the seeds which were planted in the ONE Universal Year (2017). A Universal Mind awareness will lend itself to ideals being raised and people gaining greater understanding of our inter-connectedness. Many of the changes begun in the FIVE Universal Year (2021) will take root as the responsibilities we all hold for our collective well-being are realized which will lead to a greater sense of well-being. My wish is that the changes that do take root are those of a positive and affirming nature. 2022 is the year during which the housing market may finally begin to improve in a positive, growth-oriented fashion.

As with all years, the SIX vibration of 2022 also holds negative attributes and great caution is urged here as we could easily see the worst scenarios come to be. Sadly, and first and foremost, war could also be on the horizon. In history, World War I was begun in 1914 (a Universal 6 Year) and in 1941 (a Universal 6 Year) the United States entered World War II. 1950 saw the Korean War begin. In 1968, another SIX Universal Year, saw the assassination of two leading figures in politics and social movements in the United States and the resulting social unrest was unlike anything ever seen in this country. A check of history shows that every 6 Universal Year going back to 1905, and beyond, has had more than its share of conflicts, local, regional, and globally. And, it was especially true during the 20th Century. That's not to say that war only begin in a 6 Universal Year, I am just pointing out that in the past century alone, conflicts that have involved the United States, have been concentrated in a 6 Year.

Referencing what I wrote in an earlier paragraph about possibilities.”...indications also lean towards the possibility of more co-operation in governments and legislatures. On the world stage, more effort will be directed towards solving problems internationally”, there is a codicil that must be given consideration. The negative side of the 6 energy is a tendency towards obstinance, stubbornness, and a propensity to dig one's heels in on any given subject. That type of positioning by either side in a disagreement leads only to a prolonging of the discussion with the very real possibility that nothing will be agreed upon and nothing will be settled. That does not bode well for anything in the realm of politics anywhere in the world but, most definitely, in the United States. These are the very circumstances for which we need to view our country's own history. Keep in mind that during 1860 (a 6 Universal Year), nullification took places in the states. The following year, 1861 (a Universal 7 Year), the Civil War began as a result. During 2021 (a 5 Universal Year), the Supreme Court allowed a state to effectively nullify a Federal law. And, there is an ongoing and aggressive push to nullify voting rights for millions of Americans of color and ethnicity. We should all collectively do our parts to prevent the further erosion of the foundations of this country. The result of not taking action may be worse than anything we might imagine. To quote Mark Twain, “History doesn't repeat itself, but it often rhymes.”

What could 2022 bring? With 2022 containing 3-2s, we could encounter an amplified environment demanding that both sides are understood and considered and not, at the expense of either side. We must all work to collectively emanate the vibrations of peace, co-operation and understanding with regards to human rights, equality and dignity. 2022 may also see a rise in cynicism coupled with an amplified increase in the conservative movement and dialogue. Once again, it is imperative that the entire collective is taken into consideration in the context of legislation and policies. Social upheavals may be the result of policies that are not all-inclusive with situations such as those that appeared in 1968 beginning to emerge (again!). We were perhaps presented with a glimpse into what is in store when we witnessed the social unrest during 2021 after the murder of George Floyd. Without positive action to overcome great inequities in society, poverty may become a greater issue. Other potential issues that may arise will be an increase in health problems, epidemics, hunger and homelessness. While not entirely a negative, conditions may exist that lead to the exposure of more widespread political dishonesty and chicanery. Doubt, mistrust, and hypocrisy will create a rise in political and geopolitical frictions which may lead to civil wars, social uprisings, or political coups. Steps that were not taken in 2021 to correct the situation(s) in existence, may very well lead to increasing problems in many areas of our country and economy. With the influence of the Six being paramount, much of those problems will revolve around how, as a country and a society, we take responsibility for not only ourselves but others, also. A lack of responsibility on the part of political leaders could lead to a inability to fulfill social and financial commitments further exacerbating the schisms between governments and their citizens. The SIX energy may also lead to stubborn opposition to change and improvements as different factions become more intractable in their positions.

In closing, much of what transpires in 2022 will be determined by the changes that manifested in 2021 and by the willingness of all parties to work towards a more harmonious, responsible and loving world. You, the reader can do you part through the exercising and exhibition of such traits.

One more thing: When I wrote my forecast for 2016 (a Universal 9 Year) I said that issues that needed to be handled, dismissed, and/or ended must be taken care of throughout the course of the year. It is part of the essence of the 9 that covers endings, as 9 is the last number in the series of 1-9. One certainty in Numerology is that a 9 Year is a time to rid oneself of things, people, situations, and more that no longer serve your highest good. Obviously, the same would apply to nations. Sadly, in 2016 we did not do that, in fact we actually took a few steps backwards. And, in the ways of the 9, that which should have been discarded or ended and was not, will be brought forward into the next nine-year cycle and those very conditions will only exacerbate. If not handled and solved as the cycle progresses, those same things will continue to become bigger problems. Here we are as we enter 2022 and from my perspective, things don't seem to be improving. Yes, certainly there are aspects of life that are improving but, overall, I see a deterioration in the human condition and in the ways we treat one another. We must collectively and individually find our way to making changes and working together to make this a better country and, a better world. With the 6 being the overarching Universal vibration this year, let's all do what we can to live up to the responsibilities that are associated with the number. As always, the power lies with the people. Let's make certain that power does not continue to be eroded.


Michael John Fierro has been working with Numerology since 1984. He has worked with thousands of clients and lectured extensively around the country and on hundreds of radio broadcasts. He is the author of You Know Your Name...Look Up Your Numbers (an introduction to Numerology). He is well-known for the accuracy and depth of his readings in the many thousands of clients with which he has worked. While originally from the Jersey Shore, he will be embarking on an extended, cross-country journey across America. If you wish for him to come to your town for a lecture, book-signing, class, or Numerology party, or, if you wish to book him as a guest on your radio show, contact him at www.michaeljohnfierro.com


© 2021, Michael John Fierro. Reproduction or reprints only with the express written consent of the author.